I recently reached the 10th anniversary of my leaving print journalism for the Web and, in reflecting upon some of the personal developments during that decade, I noted with some remorse my separation from one of my childhood loves — my subscription to Sports Illustrated. As a sports junkie and participant, plus a budding sportswriter, SI was my Bible. However, with the proliferation of instant score gratification and sports analysis on the Web, SI’s weekly format and in-depth, albeit well-crafted, prose no longer fit into my what’s-happening-this-millisecond lifestyle.


But, like the ugly high-school duckling who shows up to the reunion as the swan you wish you’d asked to the prom, SI is poised for a dramatic return — more beautiful, hip and engaging than ever.

C’mon, admit it, if you’re like me, you want this badly. Real badly.

Truthfully, this is the kind of experience I’d been secretly hoping for (but knowing would not materialize) when I turned to the Kindle 2 as a “newspaper savior.” After all, I left The Seattle Times a decade ago mostly for the promise of this kind of dynamic interactivity — imbedded photos that sprang to life with a click (now touch), panoramic views of stadiums and arenas, real-time statistics, easy sharing, and the like. When I was recruited to the original Rivals.com, that was exactly the picture that was painted for me.

Ten years later, many aspects of that picture now exist. My company, ESPN.com, has a killer feature called Gamecast that is available even on mobile devices, via the killer app, Scorecenter. I ordered my season tickets from Sounders FC using the team’s seat perspective, which previewed the view I’d have from various seats at Xbox Pitch. Until now, many of these kinds of features have not been aggregated in one place.

Now all of this, and more, is in something I can hold in my hands — I’ve died and gone back in time 10 years but took today’s technology with me.

No surprise here that it is the magazine industry that is first to breathe life back into “print,” if that’s what we can call the SI Tablet. With its challenges around timeliness, magazines always have focused on bright, bold photography and graphics and summaries, in addition to in-depth reporting and writing. I don’t expect SI and the rest of the Time Inc., stables to skimp on multimedia — particularly, video — the way most daily newspapers have, outside the leaders such as New York Times and Washington Post and a handful of others. The newspaper industry’s too widely held belief that users will tolerate lower standards in exchange for a new content experience is what continues to plung it into irrelevancy. 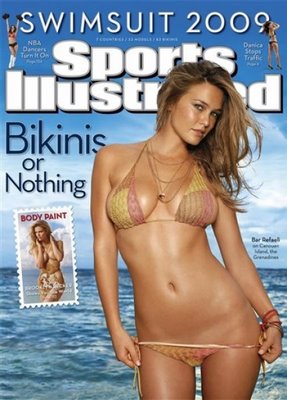 Besides, most newspapers are too consumed with figuring out how to charge micro-payments for a story to actually develop something like the SI Tablet, for which an impassioned audience likely will spend hundreds to acquire the device, then monthly fees to continue feeding the beast. As my household peanut gallery (my wife) put it, “All that, and the SI swimsuit models.” Or vice versa.

It’s no great revelation that the last decade’s great technological advancements have conferred upon vast numbers of us a bad case of Internet ADD. I guess we should not have been surprised that, given tremendous and ever growing numbers of choices, that we human beings are choosing to sample them all — and often not anything very thoroughly. If content were morsels, then we’re all fat ladies on the couch with boxes of half-eaten chocolates arrayed before us.

I’m of course not privvy to any strategic thinking at Time Inc., but if I were them, I would not offer choices on The Wonder Factory developed tablet. I’d make it a dedicated device for “niche” audiences, sports being such a huge one it defies even being identified as a niche. With Sports Illustrated’s branding — and as long as it slakes our appetite for the ever-fluid commodities such as scores, stats and news that are the lifeblood of sports fandom — I know a lot of us would be willing to settle back into some form of media monogamy.

11 thoughts on “Print’s Comeback, Dressed in a Swim Suit”