The first thing I do every morning is look outside a window, to spy the New York Times and Seattle Times, safe and dry, usually in the NYT’s blue plastic bag, sitting on my porch. Then I turn off my home alarm and retrieve them. All this, before making my first cup of coffee.

Nowadays, there is an extra step to my top-of-the-morning routine: I shuffle over to my coffee table, slide on my Kindle 2 and check to see if the day’s editions of a trio of Timeses (Seattle, New York and Los Angeles), as well as the Washington Post, have been delivered via Whispernet. So far, so good. As I would hardly blame the amazing delivery person who leaves my newspapers wrapped and easily retrievable every morning, I won’t ding Amazon’s Sprint-based, 3G delivery mechanism for the Kindle’s shortcomings in its alternative to the tree-killing, death-rattling print editions of U.S. edition. 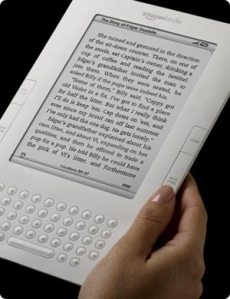 First, the good to great: Text on the Kindle 2 is crystal, eye-massagingly clear; the device is thin, light and portable, and navigation (especially to the Amazon Store, no surprise) is easy and intuitive. I’m a huge gadget guy, so the thing gets major kudos for being cool and innovative. I hadn’t planned on reading books, since I love the physical presence of bound pages and bold covers, but I may try a few because of the crispness of the text, the fact that you can bookmark pages, highlight passages and insert notes (if the only the Kindle were around when I was in grad school). I even don’t mind the text-to-speech features that others have criticized as being too robotic (ever listen to a Garmin GPS device?).

Overall the newspaper experience on the Kindle is, well, sterile. The device is white and the e-ink screen is black on white. A lot of guys will recognize a parallel: Ever see a pile of stories on the floor in a bathroom stall that someone printed from a news Web site and brought to the throne with him? That’s kind of what it’s like to read a newspaper on the Kindle. It’s even close to being that random. First off, there’s no facsimile, even if non-functional, of section fronts, only an index of sections. . (Poynter’s online columnist, Jim Romenesko, pointed out to me that one clicks on the number next to each section listing to get a story list). You kind of jump in blind, the “home page” being what someone deemed as the day’s top story.

(For those Gen X or Y readers who’ve never actually seen a newspaper, scanning the front page gives one a sense of the day’s main content, as determined by the paper’s editors, and headlines provide a further clue as to importance and content).

(By the way, I’m also trying the New Yorker and was stunned to discover that a version of the magazine’s iconic covers is not included).

I presume, within the Kindle’s parameters, each newspaper controls some small factors contributing to look and feel. For example, the New York Times uses the most photographs, the Post less so. The L.A. and Seattle Times, two newspapers that traditionally have taken pride in their photography, offer none. Talk about sterile. The photographs, by the way, have a mimeographed appearance. The Kindle 2 upgraded its resolution from four shades of gray to 16. Photography and graphics will not be a satisfactory experience until that resolution is bumped up to 64 shades of gray or, gasp, color.

The way each newspaper is “organized” is disappointing. A stories listing is a major absence. What’s more, stories are not packaged when news developments dictate. In other words, the lead story in The Seattle Times sports section was the University of Washington men’s basketball team clinching a share of the Pac-10 championship, which was followed by a column on the subject, but not all of the sidebars. Those were reached after scrolling through eight other stories about Ichiro, the Seahawks and, even, skiing. I understand some people like to scan through the top news stories, then drill down to specific topics, but, the point is, there is no choice.

Of course, any newspaper only is as good as its content. Which is why I cancelled The Seattle Times today. There’s no way I’m going to pay $5.99 for such a high percentage of wire content, no photos and a sections listing that distinguishes only between News and the day’s local news, with no “front page” listing that the others offer. I likely will not continue my subscription to the New York Times (all subscriptions can be sampled via a 14-day trial), since I get home delivery and, even if I didn’t, prefer the Times Reader and Times Mobile experiences over those of the Kindle. The only paper I’ll likely continue is the Post, which produces robust political coverage as well as stimulating analysis and features, such as Eli Saslow’s interesting and informative piece about President Obama’s efforts to keep grounded in everyday and personal life, “Obama, Reaching Outside the Bubble”.

I’d expected some bastardized version of the Times Reader, for which the NY Times really thought out of the browser and box. Viewed in the Reader, the New York Times looks a lot like a newspaper, with stories laid out logically and with color photos or graphics. What’s more, one can navigate story to story, jump from the lead story to any other story, and section to section, where once again, the day’s offerings are laid out. The Times Mobile app similarly displays a list of stories with summaries and, often, photos or graphics; one also can navigate section to section. It’s all a little cramped on an iPhone; still, it’s not a bad way to keep up with the news while on vacation in some remote part of the country (say, Portland, Ore.) or world.

This isn’t to say that the Kindle 3 or 4, or the reader that Hearst is supposed to be producing, won’t become a better alternative to or replacement for print. What’s needed is a larger, color screen with touch technology that will display page layouts, higher-resolution photography and graphics, and the ability to activate imbedded videos and other multimedia. The Kindle 2 has a mini-keyboard, which accommodates your Amazon shopper, but all of its functions also could be accomplished on a pop-up, touch-screen keyboard. All the technology exists to develop such a device; I suppose the biggest obstacles could be cost, but the Kindle 2 is as expensive as an iPhone, for goshsakes.

5 thoughts on “The Kindle 2 Won’t Save Newspapers”