Sports photographers have it drummed into their heads to get the ball (or puck or curling stone) into their pictures, and with good reason. The ball is the centerpiece of any action and serves to provide context and perspective to any sports action shot. It’s considered so important, in fact, that among the 79 photos found to be digitally doctored by prize-winning photographer Allen Detrich, one of the best-known was a women’s basketball shot into which an otherwise missing ball was Photoshopped.

Detrich and others needn’t go that far, in my opinion. There are plenty of subjects and moments away from the ball that are essential to telling the story of a basketball game, for example. That’s why I love shooting state tournaments. The stakes are high, and so is the emotion and intensity. So much so, in fact, that I try not to “resort” to the tried-and-true, hidden-ball tricks of sports photography, such as the celebration (unless it’s for a championship) or the often-colorful (but ever-present and stationary) fans (that said, I’ve included another cliche, the cheerleader, below).

While shooting a day of the Washington State 4A tournament this week, I really noticed how dogged most photographers were in their pursuit of the ball. For example, I often try to “shoot through” a play — keeping the shutter depressed in a burst even after a basket is made or a foul committed — because there are reactions and even consequences such as hair pulling, stomping and rabbit punches (not all sugar and spice, this sport of girls’ basketball). This is my photographic equivalent of following through. All of the guys shooting around me stopped when the action did. I wondered why they stopped, and they probably wondered why I did not.

It’s maybe because I was trying to get something I noticed earlier in the action, like these neon shoes. 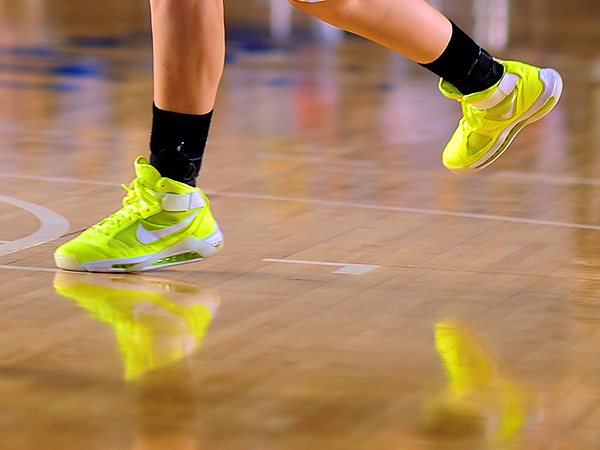 A lot of times, it’s not “chimping” (looking through your just-recorded images on the LCD screen of your camera) during timeouts and finding animation in a face like official Al Perez, set against the neon art installation at the Tacoma Dome (yes, I have a thing for neon).

And sometimes the enthusiasm of a cheerleader helps tell the story about the atmosphere of the competition.

You also cannot assume that you got all that a subject had to offer in just one visit. Follow-up can offer equally good rewards. Julie Martin, the Marysville-Pilchuk coach, originally piqued my interest because she was wearing a coat on the sidelines during the game. Checking that out, I noticed the expressions of her and her players. I went back later, when MPHS was in the midst of a frenzied comeback, and got this.

Finally, I might keep shooting after a play because the aftermath is more interesting. Here, Kentwood’s Sanda Milovic is consoled by an assistant coach and teammate Kylie Huerta after she missed a potentially game-tying shot during an upset loss to Mead.

Again, the ball appears in none of the above shots, yet I hope you agree they are interesting unto themselves, and help tell the story of a day at an event that was colorful and emotional — though played with a ball.

One thought on “The Hidden Ball Trick”